Georgia Deserve Better and Always Has 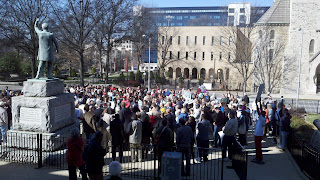 The rally at noon on Saturday kicking off the Georgia Democratic Party’s new campaign was fantastic – the weather was perfect, the energy was strong, there was excitement in the air.  The new Democratic leadership in Georgia are energizing the base in a way I can’t recall I have ever seen before.  Inclusive behavior, creative thinking, holding to real progressive principles – I can’t stop thinking that if we had only had this leadership in 2007 how we could have turned Georgia blue.

The message that ‘Georgia Deserves Better’ is powerful and right on target.  Georgia DOES deserve better and always has.

This had definitely been ‘the week of the Democrats.’  The Republicans are doing our job for us on the National stage and the President’s State of the Union speech has launched us officially into the political season that is rallying the Democratic party all across the country.

Last week we Mid-Fulton Democrats hosted a State of the Union Speech Watch Party at a neighborhood bar because greasy food and beer goes great with just such an event!  A writer with The Patched blogged about us all night long from the next booth - taking pictures and asking us questions throughout the night.   It was an electrifying evening and as I sat there celebrating our President I was taken back almost four years earlier to Invesco Stadium and the thrill of sitting in that arena with 80,000 of my closest friends and the greatest pride I had ever felt about ‘my party.’

I loved his speech last week. I revealed in the supportive conversation and banter between my fellow Democrats as we hooped and hollered in support of our President.  But I was particularly moved by a poignant moment that happened between two of my companions that put it all into perspective for me.  One young and bright and energetic and rather new to Georgia politics, the other an older, long time progressive activist from the north.

As we awaited the start of the speech the older woman mentioned as to how she had seen a Facebook page for ‘Yellow Dog Democrats’ and asked those of us working with the Democratic Party about that group.  Clearly, she knew the history of “Yellow Dogs” in this State and was confused that they had such a proud presence in the face of the ‘new’ Democratic south.  A humiliating history which she began to expound upon – a party that would ‘rather vote for a yellow dog than the damn Republican Yankees who freed our slaves and ruined our economy.’  An error I find frequently made by well-meaning northerners who come to the south and want to remind us of our dark past and greatest humiliations as we work so hard to exercise those demons and make a brighter future.

My younger companion was taken aback.  She made it clear, very quickly, that in fact SHE had helped organize that newly formed group and seemed baffled and confused by the expressed distain.  I love this part – she immediately pulled out her smart phone and did a Google search.  Wikipeadia!  Her history lesson now a little more complete with 3rd party corroboration, she quickly informed our northern companion that THIS yellow dog group was not THAT yellow dog group at all.  My heart ached for her as her pride for the group's hard work was stained by the reality of a Democratic party history that she had never connected with, because she only had today’s Democratic party as a frame of reference.

Today REAL Democrats, like my young companion, can give Georgia what it deserves.  Compassion, resources, fairness, equity for its citizens – ALL its citizens.  We are making a new name for the Democratic Party in Georgia.  We are exercising the demons of our past and making today’s Democratic Party the REAL progressive party it should have always been.

I am proud of my young companion because in her own way she is casting out the negative past of the old Democratic Party of Georgia by reclaiming and rebranding the new ‘Yellow Dog’ label to be something we can be proud of, rather than a shameful reminder of our past to be found in Wikipedia.   I like the new Democratic Party leadership in Georgia and support our new rally cry. 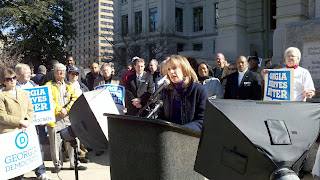