City Council President Ceasar Mitchell and I have a lot in common.  We were both born and raised in Atlanta.  They were two very different Atlantas, his on the west side and mine on the east, but we had much in common, nonetheless.  He and I were innocent children at a time when Atlanta was losing population and the City seemed to be shrinking around us.  He experienced the tail end of Black migration to the north and west.  I witnessed white flight to the suburbs.  But we both had parents’ who stayed; his mother a teacher, my father a professor – both families contributing to their communities.  They instilled in us a love for our City and a dedication that comes from staying.
Jane hosted the Alliance of Intown Neighbors meeting at her home in Midtown last week and Ceasar was our guest.  I have wondered in and out of this informal group of neighborhood leaders and influencers over the years but find I am more in than out these days.  I love our ‘living room’ chats with City, County and State elected representative.  They get 2 hours in an intimate setting to interact in a way they generally don’t get to experience in their very public life.  We get to freely express our informed concerns and our sincere appreciations.  No snarky comments or cheap shots. We are grown-ups and it’s a safe space to converse.  As a result, we often have very frank and genuine conversations.
Our evening with Ceasar was just that; genuine, and he went there with us honestly, as the conversation turned to the inevitable issue of APS redistricting.  Our normal attendance of between 6 and 8 was far exceeded to standing room only in Jane’s shrinking living room.  Kind but troubled minds representing neighborhoods flung far and wide across the City expressed their exasperation and exhaustion at the process and at APS.  My heart skipped a beat as I watched Ceasar take a moment to show that charming smile as he dropped his chin just a bit.  Would he remind everyone in that room that he was the son of an APS teacher?  Could I see behind that smile a hint of pain at the conflict this processes was causing in his City?
We bantered back and forth with him as he told us about the Council’s struggle with the question of APS.  Some wanted greater action while others were more cautious.  Concerned homeowners expressed their worry about a further depression of already low home prices.  Neighborhood leaders want a resolution to unused and boarded up APS properties.  Parents of children who might be redistricted to ‘less desirable’ schools were too obvious.  But Ceasar was steady in his responses ‘where can the City influence this conversation, appropriately?’  But as the conversation drew on, a moment of complete honestly presented itself and I will be eternally grateful for that safe space and Ceasar’s genuine heart, “the real issue,” he says directly and with full voice “is that we are not prepared to have ‘the conversation’.” And because I had been raised in our two Atlantas, I knew instantly what he meant.  And he was right, of course.
We are still not ready to have that conversation, and my heart has been heavy with the reality of his words ever since.  We have a lot in common, Ceasar Mitchell and I.  I have not asked him, but I think he would agree.  We love our City but we know its limitations…..and we stay, like our parents before us.  Ceasar stays because he can influence it.  He stays because he is prepared to do the hard work.
Perhaps Ceasar, if we just stay long enough, perhaps one day soon we will make a safe space to have ‘the conversation,’ and I really want to be here when it happens.  So, like you, this ATLGal stays and looks forward to more conversations with you in Jane's living room. 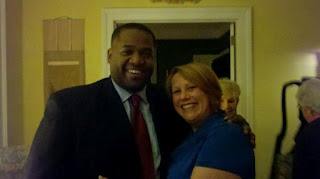