I Lost the Hyatt Regency 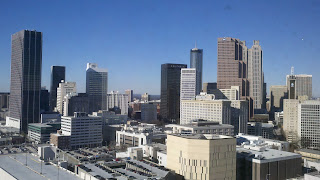 I was on the 10th floor of the Sloppy Floyd Building today and I could not find the Hyatt Regency Hotel.  Has anyone seen it lately?   I was sure when I went to the window I'd see it and that old familiar building would take me back to my childhood and I'd point at it and tell my companion about how I used to ride round and round in circles inside the blue dome....but it wasn't there. Very disconcerting.

The evening before I had a wonderful conversation with a cute, young bartender in a bar a block off of Ponce about what downtown looked like when I was a child.  My girlfriend had gotten caught in traffic - that Freedom Parkway light at Boulevard is a real bummer.  After she arrived, I reminded her that Edgewood and Decatur are ever so much more efficient when coming from downtown at that hour.

My young companion had poured me a drink and asked the only person sitting at the bar if I 'come here often.'  I was flattered for about a split second, when it occurred to me he was just bored, not flirting.  So I told him about how I used to come to this bar when it had another name and lived another life, many years ago.  He seemed genuinely curious to hear more about how the area had changed since I moved here and I just could not hold myself back....I love this kind of an opening.  Ask me anything about Atlanta.  please!

"Oh ho!" I exclaimed with faint modesty, "I was born and raised here.  Have lived most my life within 3 miles of this very spot. I've seen changes most people have only heard about."    He was too kind - 'tell him more', he said.  Okey dokey - remember you asked.  I spent the next 10 mins in a stream of conscientiousness that broke only long enough for me to take a sip of my drink.  I actually startled myself at the details of what I remembered, as a child. He didn't blink.  He didn't move and so the flow of useless information just kept coming.   Juniper and Spring St were once two-way streets (and West Peachtree should go back to two-way, but that is another conversation).  The Fox Theater was almost torn down.  We used to swim in the lake in Piedmont Park (I think he made a face at that one).

But what stuck in my mind's eye was the view from atop of the Hyatt. That view seemed like it went on forever.  I could see Stone Mountain from up waaaay there, playing 'hide-n-go-seek' out of the dense green tree canopy!   It was a breathtaking view for a little girl.  He interrupted my slightly rum influenced monologue  -'yes!' he had seen that 'little blue dome.'  I paused, why did I feel slightly insulted  by his comment?

My young companion had never seen Atlanta's skyline without 40-story skyscrapers.  Portman buildings and   giant towers along Peachtree from downtown to mid-town are his only frame of reference.  For him, Atlanta always had a 16-lane freeway running through the middle of it and a brown haze on the horizon.  But not for me.

So here I stand, 100 feet above downtown,  the Georgia Capitol covered in Dahlonega gold shining out one window and a wonderful City skyline out another,  but there is no blue Hyatt Regency dome anywhere to be seen.  I was just SURE I'd see it from up here.  Now where did it go?  I think I've lost it.

I can relate to that! Thanks for the memories ...