Loki and I received our invitation to come into the soon-to-be-opened leasing office of the Flats at PCM a month before the office ‘grand opening’ and so we set our date to talk with a leasing agent for May 15 at 10am.  Our appointment was actually set for an hour BEFORE the doors open because, as I told you before, I was #1 on ‘the list’.  Almost a year earlier I had asked the residential developer to make a ‘waiting list’ so I could be on the top.  I was so obsessed with living in the 'old Sears building' that I felt like the women in the TV commercial banging on the glass doors of some retail store demanding ‘open, open, open.’

By email, I was thrilled to find our leasing agent at the Flats was the same young woman who had been my leasing agent at the Amli apartment directly across the street, which I had now inhabited for almost a year.  She had taken a position in this new organization because she knew from the press, and the buzz around town, it was going to be the ‘happening’ place.  On the phone she told me she recalled my story (read obsession) from our conversation in early 2013.  She remembered that Amli at Fourth Ward was just a stopover as I waited for PCM to give me a call.  And when I arrived for our appointment at the Flats on May 15, there she was my lovely Carrie, all smiles and hugs and demanding to see Loki (you might recall from earlier blogs that he’s 6 ½ lbs of the cuties dog ever).

Now, from years of experience, I know nothing goes smoothly when you open any new business.  It can take days, weeks, even months to get the flow rolling in a new office, make the computer programs all work right, insure the staff has learned all the rules, get IT to work out all the technical clinches.  Naturally, that applied to the Flats, as well.    But when your profile is as big as Jamestown and Ponce City Market, when the press reports on the replacement of every brick and window, and when each newly signed commercial tenant make headlines, if you mess up, even a little, its news and it’s big.

Within days of opening, the Flats had been roundly criticized in the press and on social media for their pricing model and Ponce City Market’s adoring public have been pretty vocal (and rather incredulous) about what appears to be above market pricing for a tiny unit in a development with virtually no typical apartment community amenities (no pool, no gym – but hey, a putt-putt golf course on the roof!) in a building located in Old Fourth Ward (up and coming neighborhood for sure, but it’s no Buckhead).   I too experienced ‘sticker shock’ when I was handed the lease paperwork.  The base price seemed a bit steep but the shock really came with the ‘add-ons’ and they were many.

First, the base price posted on the web site was not the price for the unit (a legitimate, and oft mentioned, issue).   Of course, there was a pet fee (expected, and Loki is worth it) and pest control fee (still unclear why that was not included in the base price – could I have ‘declined’ that add-on?  Doubtful).  Trash and recycling pick-up fee.  Internet Fee (for limited bandwidth wifi, but you are welcome to get Comcast or some other provider, but they don't know who yet).  On sight storage fee (because, really, who can put a life time of stuff into a 655 sq ft apartment?).  Good news:  the stovetop is gas.  Bad news:  one more utility to turn on (and the leasing office was not sure if that would be covered in the rent or if I was on my own).    To add insult to injury, a parking space in NOT included in the base price.  Yes, I was stunned.  I even baulked out loud to my dear Carrie.  I needed a little time to process the dollar amount printed on the page in front of me.

What could possibly justify a lease amount for a 655 sq. ft. 1 bedroom/1 bathroom apartment that was almost the same as what I was paying across the street for a 1200 sq. ft.  2/2?, I asked myself, repeatedly!! 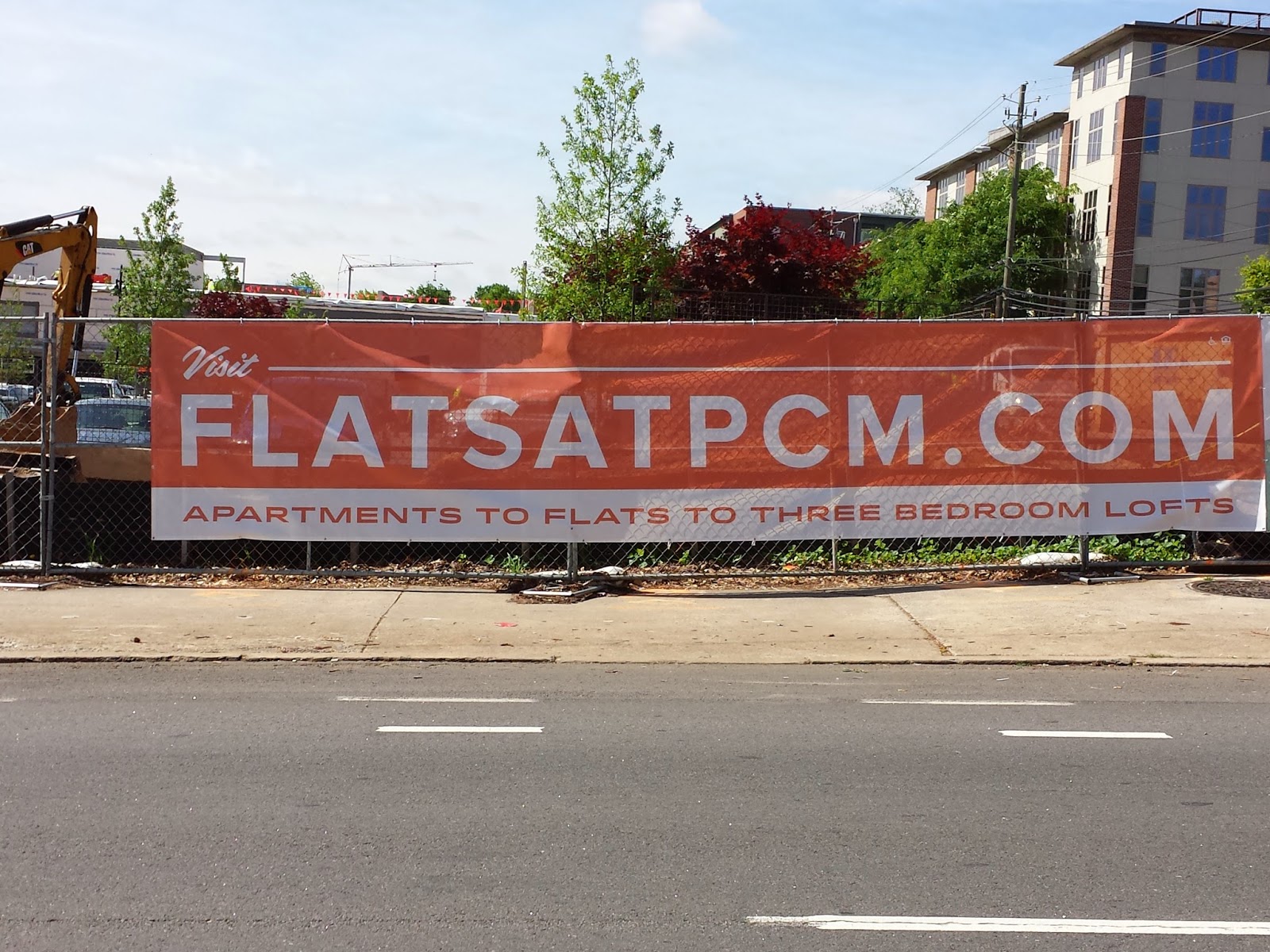 But I already knew the answer, even as my brain was reeling and mouth was forming the words. I’ve known from the beginning.  I knew it 10 years ago when I first professed to my friends that one day I’d live in that building.  Loki and I are going to live in history.   Anyone who wants to live in PCM Flats won’t be expecting a pool or a parking space.  They will be expecting an experience unique in Atlanta.  They will live in a Jamestown development.  They will have the Atlanta Beltline at their front door.  Anyone living in PCM Flats will be part of a community that will probably never be duplicated anywhere else, ever, in Atlanta.   It will be in the news, all the time.  There will be life and energy coursing through the building 24/7/365 as people work and live and play in this amazing space.
As tenants in the Flats, we’ll walk down our own corridors to some of the best food in Atlanta and shop in some of the finest stores.  The experience will go beyond the amazing skyline views and convenience of ‘intown living.’  Tourists will make it a destination stop.  Our friends will visit on the pretense of hanging out with us, but really will just want to see the inside of this amazing, historic building. [Fair warning to my friends, bring a bottle of wine if you want the tour.]

Further, not all units will be priced at these rather steep market rates.   I know there are 259 units in the building and 20% of the units must be offered at ‘affordable’ pricing because that was a requirement of the neighborhoods and included in the City’s development plan for the project.  These units are reserved for anyone making less than $50k per year.  Many people, who desire to live in the Flat, but would not otherwise have the financial resources, might now qualify and their base rent will be about 20% less than market priced rent.  There will be a diversity of all types of people from all walks of life.
As for paying for a parking space, I had to laugh out-loud when I realized that it was my own damn fault I had to pay this fee.  After all, I was part of the community-appointed team insisting this transit-oriented development, sitting inside the Beltline zoning overlay, not be required to comply with the City’s prerequisite number of parking spaces, specifically in order to draw urban-oriented tenants who would chose to use transit and other alternative forms of transportation.  Sigh.

So, as I looked at my lease again, this time the dollar amount on the page had a new meaning to me.  It hadn't changed, but now it had perspective and symmetry. Right, they are still working out the 'kinks' for this new business, however PCM is in fact delivering on what it promised.  No one ever said that Jamestown would be offering cheap apartment living.  This ATLGal does think Ponce City Market won’t be a home for everyone to live in, but it will be a unique and inspirational place for anyone to enjoy.  So I signed on the many, many, many (wow, the lease was longer than the closing documents on my last house – really Jamestown, what is with that??), many dotted lines and Loki and I are now preparing for our September occupancy date.

Follow Loki and me on our journey to become the first residential tenants in The Flats at Ponce City Market here on my blog http://atlgal.blogspot.com/ and ATLGal in The Patch; Midtown, VaHi and East Atlanta.