Ten years ago, on January 11, 2004, then Chair of NPU-N, Judy Clements, sent a group of neighborhood leaders an email announcing we had been selected by four NPUs (M, N, E & F) to represent the community immediately surrounding a massive complex on Ponce de Leon for the purpose of developing a list of priorities that we would communicate to potential developers interested in purchasing and re-developing the old Sears Building, at that time called City Hall East.

Then on January 14, the four seated NPU Chairs, David N. Patton (M),  Judy Clements (N), Randal Lautzenheiser (E),  penned a joint (and boldly presumptuous) letter to the City advising that  "The four NPU’s have created the City Hall East NPU Committee dedicated to working with prospective developers who will be creating proposals in response to the City’s RFP. Through early collaboration and cooperation, together we can shape proposals that are profitable for the developer, financially acceptable for the seller and that have community support. The Committee is available to meet at your earliest convenience and as often as necessary."

To our surprise, the City agreed to work with this committee.   It was an historic moment, because as far as anyone could remember, never in the history of the City had a Mayor agreed to work so closely with residents on the disposition of such a substantive piece of City property. 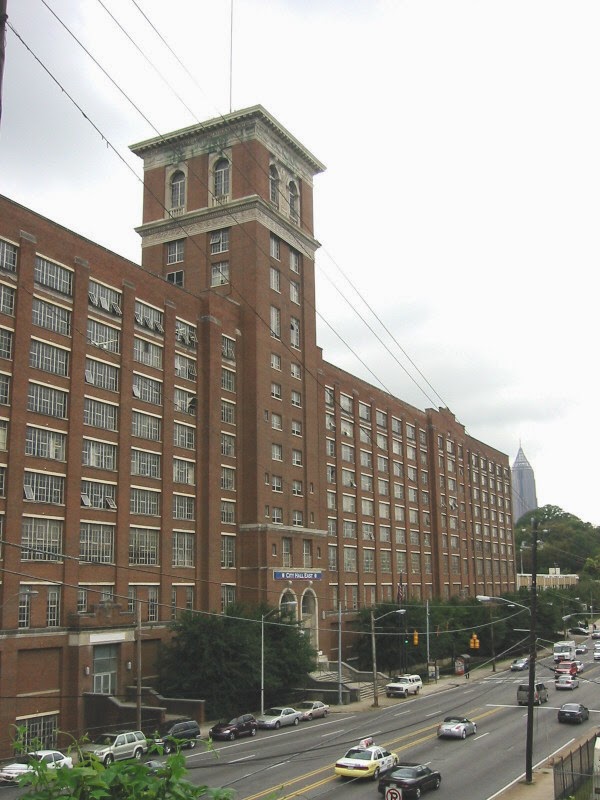 Everyone was flying blind, but we were all excited about the possibilities and anxious about the future of this historic building with its footprint in Old Fourth Ward but its shadow stretching across many more neighborhoods.  Our stated goal was to prepare a document that would act as a unified voice of the community and would be used to inform the City, and potential developers, of our tolerance level and our lines in the sand.  To my knowledge, this also had never been done before.  But these were extraordinary times and the leadership of these NPUs had developed a reputation as level-headed representatives for their communities and respected by City leadership.  I expect that served us well.

What followed over the next few months was a flurry of emails, mis-communications, loss and regain of trusts, endless meetings with neighbors and City Hall staff.  Old buried bones and cultural fears attempted to derail the process but successes in leadership and shared vision ultimately got us a document we could all stand behind.

Then, with far more bravado than actual authority, we insisted that document be included in the RFP issued in March, 2004 – and it was.  Every potential developer received our two pages of carefully constructed words in bullet point format filled with our concerns, our years of experience, our hopes and dreams for our communities, our line in the sand.

And then we waited.

On August 4, a few of us were invited to a meeting at City Hall where Mayor Franklin, along with Greg Pridgeon and Dave Edwards, quizzed us…how much is ‘enough’ green space?  Can the City sell the property with enough developable land to make some money for the City while preserving enough open land to satisfy the neighborhoods?  How could the City get the needed  $25mil plus for that property if we demanded so much open land?   More importantly we were asked the stupidest question I have ever been asked by any public official, 'don't you think we have enough parks in Atlanta, already?'

We knew this ‘financial strain’ conversation was coming - we'd seen the article and had heard about the issue - the City was in financial stress and wanted to include the south parcel in the sale for development.  We had cleverly met 2 days before to prepare.  Doug, Liz, Dianne, Derek, Cedric, and I.  Were we all on the same page?  Could our very different neighborhoods with unique needs stand together and avoid being manipulated into conflict with one another?   A pivotal moment.  The Park was a non-negotiable - we agreed.  There MUST be a park in Old Fourth Ward.  We asked for 6.5 acres.  Everyone was prepared to stand strong for Old Fourth Ward.

The message came through loud and clear to the City; there must be a substantive park, if not there then somewhere near, was our answer.   End of discussion.

And then we waited some more.  More emails.  More meetings. More push and pull from other unexpected places; The Atlanta Beltline, the Sewer Consent decree.

In the next of what was a series of incredible steps of inclusion by the City, we were advised (by Dave Edwards, I think) that there were three development teams and we’d get the opportunity to meet with each one.  Shock and joy!

Then came the charrettes (intimate conversations with each development team to review their proposed plans and offer suggestions and concerns).  Three in quick succession.  And after, we were asked to provide our #1 pick.  Almost unanimously, we picked the same development team as had the City.

Now I ask you to stop for a moment and think about this historic moment.

WE, citizen representatives from our neighborhoods, with limited experience in commercial development, design or zoning  were asked to provide input on the selection of the redevelopment team for one of the most substantive land deals in the City's history.  Our concerted opinions were provided, after careful consideration by all the citizen participants and then meticulously drafted into a response to insure clarity around why we made the selection we did and any continued concerns.  Our opinions were accepted by the City and acted upon - many included in the final development agreement; affordable housing, traffic control, surface parking limits, new streets through the property, and more.  Historic.  Brave.  The right thing to do that does not always get done.

There are a hundred more stories that can (and should) be told by dozens of volunteer neighborhood leaders who participated during that time, to completely illuminate this historic tale, this historic year, this historic transaction.  The ups and downs.  The work, diligence, commitment, string pulling, prayers, fear, tears and joys expressed by all of us.

I reflect on this now, at the 10 year anniversary simply to remind us of the great good done by everyone involved.   I don’t have to tell you what wondrous and amazing thing has come of this work  (despite the economic drag that slowed it down).  Just look at what will open this fall as Ponce City Market.

I am confident that most of this City's citizens who will soon work and live and visit and shop in Ponce City Market and play around the waters of the 17.5 acre park just across the street, will never know about the hard work and commitment by scores of dedicated Atlanta residents and local business owners in four NPUs, combined with the lucky confluence of the design and development of The Atlanta Beltline and the pain of compliance with a water/sewer consent decree and how it all resulted in the revitalization the Historic Sear Building.  This year, I suspect, many names will be put on many plaques and walls and public records of recognition for having gotten the project 'over the finish line,' but I am remembering the names of those who raised it up off the ground to begin a great journey 10 years ago.