There Is No Such Thing As Being Non-Political

Do you know if you are registered to vote in Georgia?
Do you know what NEW State and local districts you live in (the lines have moved, folks!)?
Do you know where to vote?  Do you know WHEN to vote?
Do you want to see a Sample Ballot?
Go here to find out I'M SO SMART 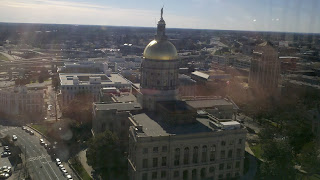 I gotta tell you something, I am about as sick and tired as I can be with people I meet griping and complaining about stupid politicians and bad legislation and right in middle of the conversation I find out they have no idea who their State Representative is, NEVER volunteered on a campaign and rarely vote!  It infuriates me so much it makes me want to punch them right in the nose.   Generally, I take the high road and just turn and walk away.  Generally.

My friend Melanie has a name for these people; 'Slacktivists.'

Joan Kirner was quoted at Women Into Power Conference, Adelaide, October 1994 as saying "There is no such thing as being non-political. Just by making a decision to stay out of politics you are making the decision to allow others to shape politics and exert power over you. And if you are alienated from the current political system, then just by staying out of it you do nothing to change it, you simply entrench it."

Doing nothing but bitching about the political circus going on around you won't make it go away, but it WILL insure that you sound like an idiot.

Ignoring or dismissing the political activities in your community will only insure that you can NOT make a difference in your community.  You have very little influence if you don't even know your elected officials by name. How can you call them out if you can't call the up?

For sure, if you abdicate then others will decide your quality of life.  Others will spend your tax dollars and make decisions on how you spend your money.  Others will benefit from your lack of participation.  And then its complain, kvetch, condemn and you sound so ignorant.

Do us all a favor - if you won't put some skin in the game then shut up.  If you can't tell me what Congressional district you live in then zip it.  If you have NEVER attend even ONE City Council or School Board meeting then button it up.  If you haven't voted in the last 2 election cycles then just sit down and let the adults talk.

Get smart - get involved.  Then you will have the tools and intelligence to have a smart conversation about process, candidates and elected officials and the stupid decisions they make.  Use the link above to get started.  Call your local political party State headquarters in Georgia (Google it) and ask them who is running for what offices in your particular state and local districts.  If you want some suggestions on who's campaign to work on, give me call - of course, I have an opinion! (wink)

Then pick up the phone and volunteer on at least ONE campaign. Put out yard signs, answer the phone, make phone calls, bring cookies, wash dishes, attend events and hand out buttons and PLEASE write a check to support your candidate.   Volunteering on a campaign is easy and its temporary, but it is very empowering. Then come tell me what is ailing you about an elected official or a really terrible law and I promise I won't punch you in the nose.

Hey woman- dead on as usual. For all of your out of town registered voter friends - or those who plan to be out of town on election day - here is the absentee ballot application:

Love, Adelaide, your biggest out of town fan! :)